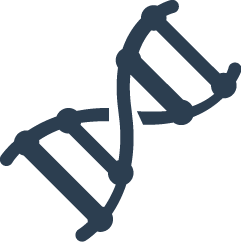 Our patented lead candidates have demonstrated benefits in animal models of disease.

These new candidates comprise DNA or small protein fragments that come with several advantages over conventional biological medicines, such as monoclonal antibodies.

MetVax is a carefully defined fragment of the protein cancer biomarker carcinoembryonic antigen (CEA), a molecule involved in the adhesive properties of cancerous cells. CEA influences the cancer cells’ ability to implant in new tissues during the process of metastasis. D5’s scientists have shown that the N-terminal domain of CEA has unique properties that form the basis of MetVax, a novel cancer vaccine that works by priming the body’s immune response to recognize circulating CEA. The resulting production of antibodies that intervene and prevent the metastatic spread of disease—one of the crucial events that correlate with poor prognosis—has enormous potential to revolutionize patient outcomes.

MetVax protects against metastasis by a new mechanism of immunity.

D5Pharma’s lead drug candidate is PEG:CCS13, a PEGylated single-stranded DNA aptamer that is a selective agonist for the inflammatory modulator, CD200R1, a glycoprotein receptor found on the surface of immune cells. CD200R1 acts as the receptor target for CD200-presenting cells during natural signalling processes that body invokes to dampen the immune response.

PEG:CCS13 is a synthetic agonist for this receptor, acting much like an antibody, and enabling immune reactions to be brought under control by a novel mechanism that is distinct from today’s commonly prescribed anti-TNF medicines. As a consequence of D5Pharma’s unique selection approach, PEG:CCS13 is, moreover, a cross-reacting DNA aptamer that selectively recognizes both mouse and human targets, enabling direct bridging from pre-clinical to clinical studies. The addition of the PEGylation, a synthetic modification, allows PEG:CCS13 to be injected and maintained in the circulation for longer and more therapeutically relevant periods of time. This lead candidate has demonstrated efficacy in pre-clinical models of human inflammatory disease.